Skip to content
It may be the curse of an ecological restorationist. The seasonal changes that occur in early spring reveal something interesting to the trained eye. Early April brings on the green. Now I love the color green…might be my favorite color. It reminds me of summer. It reminds me of life in all its fullness and richness and abundance. But to the restorer of native landscapes, green this time of year generally means that it does not belong here. Almost all that is green this time of year…green lawn and pasture grasses, most evergreens, spruce, pines, and fir, emerging green leaves of bush honeysuckle, multiflora rose, privet, and autumn olive…was brought to northeast Indiana from elsewhere.
Lawn and pasture grasses were brought by our pioneer forefathers from northern Europe. Evergreens (except for our native red cedar) come to us from further north or west. And the woody brush species were imported into our country from all around the globe as garden or landscape plants or as wildlife attractors. No, the color that settlers to Steuben County recognized in late snowless winters and early spring was…tawny.
And so, on this Saturday afternoon following an overnight snowfall (which followed an earlier than usual spring green-up), I was driving about noticing the greenery that stuck out like a sore thumb against the white backdrop. Most of the snow had melted by the time I pulled into the driveway of ACRES Land Trust’s Wing Haven Nature Preserve. I snapped a couple of pictures of the prairie restoration and was reminded of the story the photo captures. 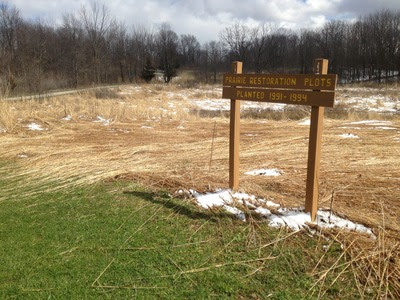 Helen and Ben Swenson owned the land that is now the preserve. The Swenson’s tried a bit of agriculture as had the previous owners. The two fields on either side of the preserve’s entrance drive were tilled and planted to corn and wheat…maybe beans and oats in the 1940’s and 1950’s. Later the fields were converted to pasture for Helen’s horse. By the time the property was bequeathed to ACRES, the two pastures had become meadows.
Now meadows harken back to England and Germany from whence the word originated [Old English mǣdwe, oblique case of mǣd (see mead), from the Germanic base of mow]. Meadows are basically fields or pastures with no trees. Meadows in Europe and meadows in Steuben County look the same because they have the same plant species. Cool-season grasses like orchard grass, Kentucky bluegrass (funny name, I know), Timothy, and fescues plus European flowers like Queen Anne’s lace and dandelion and plantain are indicative of meadows native to England. Pioneer farmers imported these species when they brought with them agricultural practices of Europe.
Fred and Jackie Wooley were Wing Haven’s first caretakers (ca. 1983-2001). Fred set out to plant a small prairie in the west meadow. He hand-collected some big bluestem, butterfly milkweed, yellow coneflower, and prairie dock seeds from along a small prairie remnant along the railroad tracks near the then Dairy Queen location in Angola. He grew those seeds into little prairie plant plugs. And in 1991, he had a very small area of the cool-season meadow plowed and disked. He planted those plugs, tended them and watered them. And for the next four seasons he expanded the little prairie planting until it reached about a tenth of an acre in size. Then each spring he set fire to the little prairie garden.
Fred asked me to help him burn the little prairie the spring of 2000. In the spring of 2001, we decided to burn the whole field because the multiflora rose had grown so thick in the meadow. Aimee and I became the new caretakers of Wing Haven that same spring and Blue Heron Ministries continued with the stewardship of the field.
In the early days of Blue Heron Ministries, we cleaned and stored hand-collected prairie seed in the barn at Wing Haven. Each spring after we set fire to the meadow, we would scatter the chaff and any leftover seed on the blackened soil. We started burning both old fields. The annual fires suppressed the growth of the brush and the cool-season grasses and meadow flowers and at the same time favored the germination, growth, and establishment of the warm-season prairie grasses and forbs. And as the prairie plants matured, the plants set seed. Autumn winds blew the seed eastward. The seed settled into the declining cool-season grass turf, and when the turf grasses burned, the prairie seed germinated. The prairie advanced and the meadow declined.
Twenty-five years after Fred planted the first prairie plugs and 15 years after annually burning the meadows, nary a Euro-Asian plant can be found. The only visible green this time of year is the mowed lawn along the driveway, the mowed path along the perimeter of the field, and the patch of lawn under the sign. The overwhelming color of the field is tawny. One could say it is a prairie now…at least that is what our pioneer forefathers and land surveyors called our indigenous grasslands.
But wait! Prairie… [late 18th century: from French, from Old French praerie, from Latin pratum ‘meadow’]. Maybe it still is a meadow!
This article was featured in the April edition of our Rustling Grass e-newsletter. The whole newsletter, complete with other articles by Peg Zeis and Ben Alberle, can be found in the Rustling Grass Archives page. To get these newsletters sent directly to your e-mail, let us know at stuartbheron1@hotmail.com.