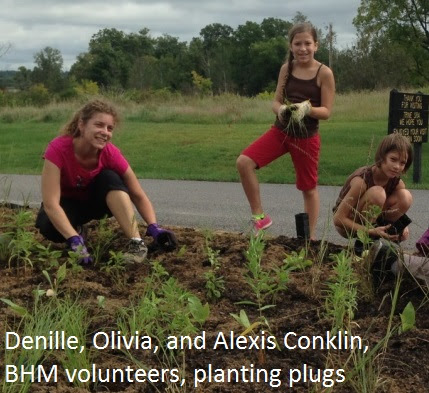 On Thursday, September 8, 2016, Blue Heron Ministries workers and volunteers finished a project four years in the making at the Trine State Recreation Area! All “islands in the sun” and other nearby parcels of land have officially been planted. Are some of you unfamiliar with this prairie planting story? Well, let’s back up a bit in time and review how it all came to be.

In late summer of 2012, Nate Simons, Director of Blue Heron Ministries, and Pokagon State Park Interpreter, Fred Wooley met at Trine State Recreation Area to discuss how best to proceed with the landscaping of this newly acquired DNR property. They came up with a great plan! Trine SRA was gearing up to open to the public but had a few last minute touches to be made, one of which these two gentlemen were planning. In brief, the property (Trine SRA), was purchased in 2006 by Ralph and Sheri Trine and then transferred to the DNR in 2007 with the financial backing of several state and local organizations. (To read about the details go to the DNR Pokagon State Park/ Trine State Recreation Area website). After being transferred, the property went through a major facelift, you might say. The property saw the removal of many buildings, renovations, restorations of natural features, and much more. A part of the “much more” is the idea that Nate and Fred came up with pertaining to the road islands at the entrance to the property.

Both Nate and Fred wanted to create the impression, to the first-time-ever visitor of the property, that the property had never been disturbed by humans, as if plantings seen upon entering had always been there. In other words, a landscape planted with sun-loving, native prairie plants from northeastern Indiana was the vision for these “road islands.”

Of course, a project like this would cost money. The initial pool of money, about $2,000, came from the 101 Lakes Land Trust, money left over from what was raised for the original purchase of the property in 2007. Various groups and individuals who visited Pokagon State Park’s Nature Center made other small donations that went toward the project.

In July of 2013, phase one of the project plantings began. There are two road islands that were being planted and the north end of the south island was planted first. Forbs and grasses were first planted and then in the gall of that year four trees were set out, three serviceberry and one burr oak. One more burr oak was planted next to the employee parking area by Emilio and Deanna Vasquez, volunteers. Other helpers that day were Lauren Loffer and Maggie Jaicomo.

In 2014, the south end of the south island was planted. Some of the forbs and grasses planted were butterfly milkweed, rough blazing star, showy goldenrod, little bluestem, prairie dropseed, and sideoats grama. A short section was also planted around the Trine entrance sign on Feather Valley Road. That same fall four trees were planted by Marjorie Hershman, Fred Wooley, and Rita Smith. Three serviceberry and one burr oak were donated by a family who visited the nature center on a regular basis and they wanted to pitch in on the project. These trees were planted in the north island.

In 2015, Cheryl Taylor look and interest in expanding our project. Through her late husband’s fund at the Community Foundation, The Ralph E. Taylor Conservation Fund, she funded the plantings in the space between the entrance road and the bike trail that year. There was also a small section by the gatehouse welcome sign that was planted at that time as well.

Finally, 2016 saw the last phase of the “islands in the sun” plantings. On September 8, we arrived at about 9 a.m. It was a mild temperature with mostly cloudy skies. There was a chance of showers and as we were unloading the plant trays from the wagon, it did begin to rain lightly. Soon it stopped raining and volunteers began arriving. We were lucky to have six people show up to help the other workers put the plants in the ground that day. All told, we planted close to 1,800 plugs of prairie forbs and grasses that day day.

John, Fred, and I unloaded the plants from the wagon and set them in groups according to their height- short, medium, and tall. While we were doing that, Benjamin was drilling holes into the soil with an auger. This technique calls for faster planting! We had ten rows across so the middle two rows were planted with the tall plants. Then, as we worked our way out to the curb we chose medium plants and short ones for the very edge. At the beginning of the day, seeing all of the holes that had been drilled into the ground and all of the plant trays with plants that needed to be planted seemed a bit daunting. But as we all worked together, by mid-day, as I stood on the south end looking to the north of that island, it was incredible how much progress we had made! The dark soil, the green plants going into the holes, the busy workers with dirt under their fingernails, had made such progress. The project looked amazing! We were nearing completion. 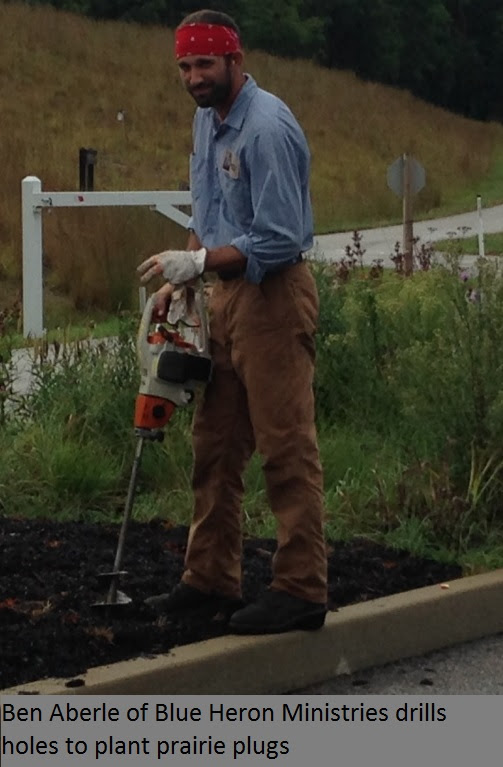 Some of our volunteers, Denille, Olivia, and Alexis could only stay for the morning. So Lynn, Deanna, Pam, and the others decided it was time for lunch. We were treated by two lunch guests. Two sandhill cranes stood along the edge of the wetland and talked to us while we were eating. This wasn’t just any lunch break!

After lunch, we continued to plant for about two more hours until all of the plants filled the drilled holes. We began picking up empty plant trays and containers and set them back into the trailer. Ben laid down a water hose in the planted area so all of the plants could have a drink to start them off in the best way. Volunteers began leaving, everything was picked off the ground, and the Trine Road Island project was now complete.

In four years’ time, the though processes of Nate and Fred had come to fruition. As the roots of the prairie grasses and forbs grow deep into the soil, the “islands in the sun” should ensure healthy plants, a variety of color, and peaceful satisfaction to the Trine State Recreation Area visitor!