We knew the day would come. But it came slowly. We anticipated it.

When director of LaGrange County Parks, Mike Metz and I stood on the plateau in late 2012 overlooking the then derelict fen, we didn’t know the details, but we thought we could restore the grossly-ditched landscape. So we wrote a grant and included a very conceptual plan of what we thought we should do to restore the hydrology and the native fen, prairie, and oak savanna plant communities that was, at that time, a cattle pasture.

The restoration concept seemed simple enough. Eradicate the invasive plant species. Fill the ditches with the very soil that came out of them. Sow seeds of native plant species. But truth be told, we had never done this before on such a grand scale. The National Fish and Wildlife Foundation believed we could do it. And the restoration of received from NFWF is half way through its tree-year duration.

With much professional consultation leading to a series of complicated events, the hydrology at Duff Lake Fen is headed in a new trajectory. The US Department of Agriculture developed a one-foot contour interval topographic map of the 108-acre property. Gensic Associates shot elevations on adjacent properties, in the main ditch, and developed a plan to restore sinuosity to that ditch. Orbis Environmental Consulting wrote the Nationwide 27 permit that would allow placing fill material in a wetland to actually restore the wetland. Usually and reluctantly giving permits to landowners to place fill in wetlands to convert wetlands to uplands for future development, the Army Corps of Engineers and Indiana Department of Environmental Management gave their blessings as they granted this seldom-used permit to put the soil back in the ditches. The Environmental Resources Center of Indiana Purdue at Fort Wayne developed a plan to reduce impacts on reptiles and amphibians. And Northup Excavating spent the better part of seven weeks moving tons of moist, rich, organic, black muck. 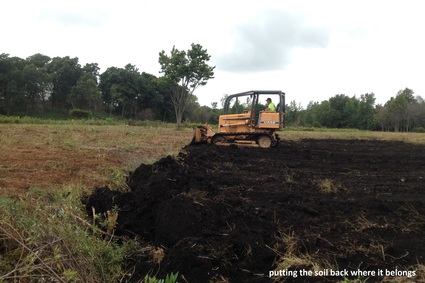 No, the restoration is not complete… and it will never be “finished,” because it will always need care. But the day arrived this week when the water took a more natural turn. The ditches are filled with the very soil that was removed to form them decades ago. And what once was a straight deep ditch is now a shallow, meandering stream. Springs have emerged all over the site and shallow pools are forming in low lying places. Water, once relatively-quickly swept away to Cedar Lake, now slowly makes its way there in a more circuitous and subterranean fashion. And the landscape awaits new and verdant life!

So, with a smile and a nod toward the long-anticipated work at Duff Lake Fen, I see the process of restoration as a looking back to what once was, acknowledging what it has become, bringing about change in a direction that mirrors (but a poor, imperfect reflection) what once was and will be again, and looking forward to the good, right, and perfectly beautiful way it will be.

When the LORD God made the earth and the heavens, neither wild plants nor grains were growing on the earth. For the LORD God had not yet sent rain to water the earth, and there were no people to cultivate the soil. Instead, springs came up from the ground and watered all the land. (Genesis 2:4-6, New Living Translation)

The parched ground will become a pool, and springs of water will satisfy the thirsty land. Marsh grass and reeds and rushes will flourish where desert jackals once lived. (Isaiah 35:7, New Living Translation)

And the one sitting on the throne said, “Look, I am making everything new!” And then he said to me, “Write this down, for what I tell you is trustworthy and true.” And he also said, “It is finished! I will give freely from the springs of the water of life. (Revelation 21: 5-6, New Living Translation)