Skip to content
And to the man he said, “Since you listened to your wife and ate from the tree whose fruit I commanded you not to eat, the ground is cursed because of you. All your life you will struggle to scratch a living from it. It will grow thorns and thistles for you, though you will eat of its grains. By the sweat of your brow will you have food to eat until you return to the ground from which you were made. For you were made from dust, and to dust you will return.” (Genesis 3:17-19)
The first man heard these strong words from his Creator as a result of his rebellion. And the world has never been the same.
I am often reminded of this part of the Story when we work to restore vitality, diversity, and beauty to wild places in and around northeast Indiana. Basically, the work of ecological restoration is to undo, bit by bit, the curse. Or as Scot McKnight writes in Blue Parakeet, “A Jesus community undoes the distortions of the fall because it seeks to live out the fullness of the Story.” Much of the work of Blue Heron Ministries is removal of weeds (or plants we deem unfit because they do not belong) from areas in which we want to see desirable or native plants and plant communities thrive.
So thorns and thistles are considered “weeds” in the garden we call “home.”
Late June and early July thorns and thistles abound. It is time to control Canada 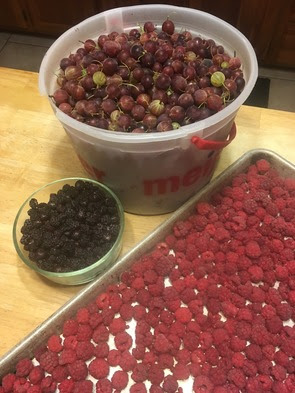 Thistle. And we do. But it is also time to harvest berries. Black raspberries. Red raspberries. And gooseberries.
Black raspberry brambles have spread along the fencerow at the edge of our prairie. Red raspberry canes arch (and spread) over wire supports in our garden. We planted three gooseberry bushes in our garden twelve years ago after transplanting them time after time as we moved from home to home over the years…an original gift from a friend. It is a good year for berries. After a bad year for gooseberries last year, this has been a bumper crop year. But all three have something in common. Thorns! They grab and scratch and poke and don’t seem to let go. And yet, the work and the sweat do yield a wonderful prize. Black raspberries, red raspberries and gooseberries for fresh eating on summer fruit salads, warm crumble-topped pies, jars of sugary jam, and frozen for winter treats.
I enjoy the fruit of the scratchy, pokey, sweaty labor. I wonder if maybe the curse is lifting a bit. I wonder if sweet berries (yes, gooseberries are “sweet” if you wait to collect them when they are pink-to-maroon and ripe). I wonder if the death and resurrection of Jesus inaugurated the coming of his Kingdom on earth….such that we can see and taste some goodness in those thorns and thistles. And I look forward to the day when the curse is finally lifted for good. It might be a day when new and thornless varieties of my beloved fruit will abound. That will be a sweet day indeed!
Yet what we suffer now is nothing compared to the glory he will reveal to us later. For all creation is waiting eagerly for that future day when God will reveal who his children really are. Against its will, all creation was subjected to God’s curse. But with eager hope, the creation looks forward to the day when it will join God’s children in glorious freedom from death and decay. (Romans 8: 18-21)
And the one sitting on the throne said, “Look, I am making everything new!” (Revelation 21:5)