Skip to content
A recent project took us to the Gene Stratton-Porter State Historic Site in Rome City. The Historic Site has acquired a neighboring farm. The agricultural field of about 70 acres is being restored to the natural landscape it once was. Still in its early stages, a short grass prairie is beginning to look like it’s been there for years, like it belongs…because it does!
Five scattered wetlands have been restored through a process of breaking drainage tiles and moving earth to create low dams.
Enter, Blue Heron Ministries. BHM worked with the Historic Site to develop a plan to re-vegetate the wetlands. The goal is to create a native wetland plant edge between the 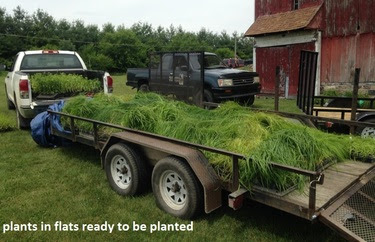 open water of the wetlands and the adjacent prairie installation. In late June and early July, BHM made five trips with varying crew sizes to plant 2 x 2 inch plugs of native wetland species of sedges, rushes, and of course, forbs…nearly 30 species in all.
We procured over 4,000 wetland plant plugs from Heartland Restoration Services in Fort Wayne and another nearly 1,000 plugs were gifted by the Indiana Chapter of The Nature Conservancy, left over from a project they had completed. Thank you TNC!
Over the course of five days, crews of four to six made the trip to Rome City and planted plugs. The wetland plants were first separated into three zones, one out in the 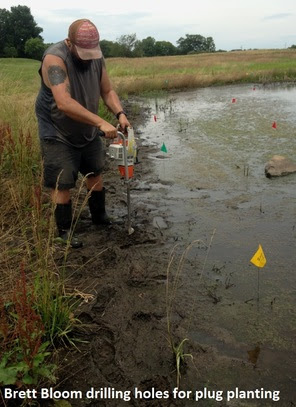 standing water, one along the muddy edge, and one just a little higher above the mud flats. A gas-powered auger with a three inch bit facilitated the placing of plugs. In deeper water, the plants were cut in with long bladed planting knives.
While working, we encountered numerous side attractions which added to what could have been monotonous work of plugging plants. Leopard frogs were active along shorelines and bullfrogs were “baroooooming” out in open water. A harrier flew by giving its characteristic call note and that of a spotted sandpaper broke the silence and revealed its teetering poster across the water.
We’d occasionally chase a family of mallards around the ponds, not intentionally, but as we circled the wetlands with flats of plants, the ducklings and mama kept a safe distance going from side to side. The most unusual sight for me, a mammal checking out our freshly planted greenery, was an adult woodchuck! It allowed me to walk right up to it! A woodchuck in water might partly be like a fish out of water. It eventually had enough and exited the water and laid a soggy trail to some distant hole in the prairie. 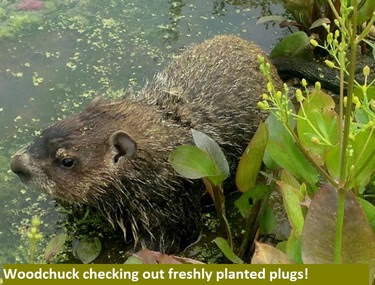 There were also Dave Fox and Tiffany Conrad sightings! Dave and Tiffany are site manager and site interpreter at GSP. They came by a couple of times to get photos, take measurements for laying strings to prevent geese encroachment, and mostly to share their excitement and that of their staff, volunteers, and public. We look forward to our return visits to monitor success of the project as the wetland sedges, bulrushes, grasses, and wildflowers establish, spread, and fill in the wetland edges. We think Gene Stratton Porter would have approved the restoration work and we think you will too. Consider taking a hike with your family!